What are penalties for the acts of fabricating information about others in Vietnam? 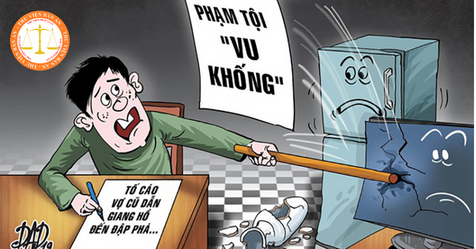 Fabricating and spreading information that is clearly untrue about other people, affecting their reputation, honor and dignity is generally called slandering others. So what are penalties for the acts of "slander" in Vietnam?

According to the regulations of Article 156 of Vietnam's Criminal Code 2015, slander means the act of: fabricating information or spreading false information to harm another person's reputation or infringes upon another person's lawful rights and interests; accusing a person of a fabricated crime report it to the authorities.

This offence committed in any of the following circumstances carries a penalty of 01 - 03 years' imprisonment:

- The offence is committed by an organized group;

- The offence involves abuse of the offender's her position or power;

- The offence is committed against 02 or more people;

- The offence is committed against the offender's grandparent, parent or a person who cares for, teaches, raises or provides medical treatment for the offender;

- The offence is committed against a law enforcement officer in performance of his/her official duties;

- The offence is committed using a computer network, telecommunications network or electronic device;

- The victim suffers from 11% - 45% mental and behavioral disability because of the offence;

This offence committed in any of the following circumstances carries a penalty of 03 - 07 years' imprisonment:

- The offence is committed by despicable motives;

- The victim suffers from ≥ 46% mental and behavioral disability;

- The offence results in the suicide of the victim.

Please refer to some of the judgements on slander below.

Trinh The C, born in 1966, was hired to print a photo of Ms. Nguyen Thi L with the content: "This woman is Nguyen Thi L who committed incest with her brother-in-law Le V who is working at Manh Trieu Company. Every week, Le V (Le V's younger brother) drives up to Quang Tri for about 9 to 10 hours to have sex. Besides, she also has a relationship with her ex-lover named Vu and many others. Only V and V transferred money to L's account, but she also had many other relationships. So I advise anyone who has had sex with this woman to get tested for STDs. Phone number: 0943513405 (Mr. Manh Trieu Company)" with the amount of about 30 sheets and then went home. At midnight, C brought printed sheets of paper and scattered them along the route in the area of ​​Bo Ban market, Trieu Phuoc commune, Trieu Phong district, Quang Tri province, and in front of Ms. L's house, then returned home. Around 06:30 on January 20, 2021, Ms. L and Mr. V discovered the incident, so they reported it to the police.

Nham Hong B is a veterinarian, tax and Fatherland Front officer working at the People's Committee of BB ward, PY town, Thai Nguyen province. B went to the office to use a computer to edit a document with the title "BB Ward is about to have a good show to watch - FAMILY TRI". Below the title are the names of some key leaders who are currently working at the People's Committee of BB ward, PY town, Thai Nguyen province, with the accusation of having kin relationships and illicit relationships, not being qualified, and not having professional qualifications. In addition, in the content of the leaflet, B also mentioned Mr. Nham Huong C - Commander of the Military Command of BB Ward and some other officials and civil servants, but the content of the slander is not clear and does not contain any suggestions. At the end of the leaflet, Nham Hong B wrote: "Since the masses do not have the vote, I urgently call on all Party members and the masses to wisely choose people who are virtuous and talented enough to lead and solve local affairs." After drafting, B prints 01 copy on A4-sized paper and then copies it into several copies, spreading it while walking on the roads of BB ward.

The People's Court of Thai Nguyen province declared that defendant Nham Hong B committed the crime of "slander", and sentenced (six) months to prison.