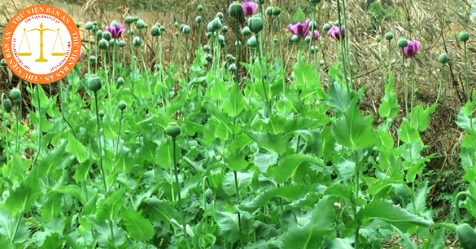 Opium poppy cultivation is strictly prohibited under the provisions of Article 5 of the Law on Drug Prevention and Control 2021. However, because of the high profit, many people still defy the law to plant, whether it is planted on trees, in gardens or sometimes on terraces. So what are the penalties for this behavior?

Firstly, opium poppy growers may be subject to criminal penalties in accordance with Article 247 of the Criminal Code 2015 (amended and supplemented in 2017).

1. Any person who grows opium poppy plants, coca plants, cannabis plants, or other plants containing narcotic substances in any of the following cases shall face a penalty of 06 - 36 months' imprisonment:

a) The offender has been reprimanded twice and enabled to earn decent living;

b) The offender previously incurred a civil penalty or has a previous conviction for the same offence which has not been expunged;

2. This offence committed in any of the following cases shall carry a penalty of 07 - 15 years' imprisonment:

a) In an organized manner;

4. The person who commits the offence specified in Clause 1 of this Article but voluntarily destroys the plants or submit them to a competent authority before harvesting might be exempt from criminal responsibility.

Secondly, if the cultivator of opium poppy has not reached the level of being examined for penal liability as prescribed in the above law, he/she shall be administratively sanctioned in accordance with Clause 3; Points a and d, Clause 8, Article 23 of Decree 144/2021/ND-CP; Specifically, the cultivator shall be subject to a fine of between VND 5 million and VND 10 million and confiscation of the cultivated opium poppy.

You can refer to the actual penalties in the following judgments:

Content of the case: "At the end of September 2017, Lau Sai P alone went up to the area of the Chong Cho T of the village T, commune T handed out a crowd to plant opium poppy with the purpose to get the opium resin for use. After sowing the seeds, on March 1, 2018, P alone went up to the crowd of women who had planted opium poppy seeds to check if there were fruits to harvest. Before leaving, P brought his own tools to hold the opium poppy and 01 sharp knife to wipe out the opium resin. At about 10:00 on the same day, P went to the shelter, P stored the tools in the shelter and then went to inspect the opium poppy, when P came back to collect the tools to harvest the opium resin, he was discovered by Muong Te district police working group to catch the tangle, through the site examination, at the opium garden, P seized 1,714 medicinal plants according to the testimony of P, which is the opium plant P sown.

At 09: 50 on March 4, 2019, when L was taking care of opium poppy, he was discovered by the Public Security Forces of Tan Uyen District, seizing a total of 588 opium poppy plants with all the parts of roots, stems, leaves, flowers and fruits.

The content of the case: "After receiving the news of the people's masses about the cultivation of opium poppy at the house of Nghiem Van C. About 12:00 on February 19, 2021, the Public Security Working Group of Commune H in collaboration with the Public Security of Dai Tu District, Thai Nguyen Province came to house C to inspect, then found at parcels No. 179, 180, map sheet No. 5, cadastral map of Commune H, Dai Tu District, under the ownership of C family with 47 plots, planted a total of 3303 trees, suspected to be opium poppy (normal growing trees, full of root parts, leaf stems, C declared as opium poppy cultivated by C for self use). The working group has made a record of the incident, seizing evidence of 3303 trees mentioned above. Then transfer all documents and records to the Public Security Investment Agency of Dai Tu district for settlement in accordance with the law.