When may a Court try in closed session? Cases regarding this matter in Vietnam 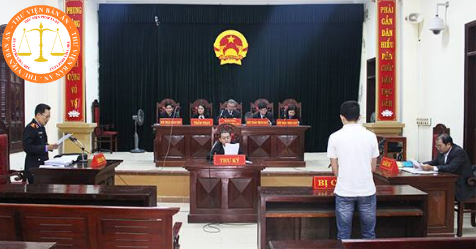 According to the principle, the Court shall try in public session and everyone has the right to attend the trial. However, in some cases, the Court can conduct a closed trial but will have to pronounce the sentence in public.

Specifically, according to the provisions of Clause 3, Article 103 of the 2013 Constitution, Article 25 of the 2015 Criminal Procedure Code:

+ Protection of persons aged below 18.

Thus, A Court may try in closed session but must pronounce its judgments publicly for special cases. Most commonly, it is to protect people under the age of 18, such as cases of abusing, raping, harrassing children under 16 years old,..

Below is a summary of some typical judgments which the Court try in closed session, for your reference:

- Quote from the content: "About 20:30 on November 17, 2018, at the area near the gate of Cam T Kindergarten, in Na T village, Cam T commune, Cam X district, Ha Tinh province, Nguyen Van D driving a motorbike with control plate 38X1-192.67, blocking Tran Thi My T's path from riding an electric motorcycle in the same direction in front, pulled T's electric motorcycle behind with both hands. Then one hand wrapped around her stomach and the left hand grabbed the OPPO NEO7 brand mobile phone worth VND 2,950,000 making the phone fall on the road. Then, D had already committed the act of raping T, so he pulled and threw T onto the grass by the roadside, then sat on top of her, controlled her with his hands and whole body, and took off T's pants and threw them to one side. He took off all his pants down to the knee level to perform sexual acts against T's will. While preparing to perform the act of intercourse, he noticed that there was a light from a passing motorcycle, so D pulled his pants on and took T's OPPO NEO7, then got on his motorbike to go home. After that, he ran away from the locality."

- Quote from the content: "Luong Van O rents a kiosk in the parking lot of Yen Phuc market, residential group 6, Phuc La ward, Ha Dong district, Hanoi city to sell tofu. Around 17:30 on September 7, 2019, Nguyen Thi My Tam rode an electric motorbike to Luong Van O's store to buy tofu. When going to the place, T got off the car and stood opposite O, about 10cm from the edge of the tofu table and asked to buy 10,000 VND tofu. At this time, O stood at the counter cutting tofu and put it in a plastic bag and gave it to T. When T gave the money to O, O used his left hand to rest on the table, while his right hand held a bag of tofu and gave it to her. As soon as she took the bag of tofu out of his hand, O used his right hand to squeeze T's left breast once. T panicked, got back on his motorbike, and went home and told her parents the whole incident. "

- Quoting the content: "At about 4:00 p.m. one day in mid-September 2019, on the way to ride a bicycle from grandson H's house to his house, when D rode a bicycle near defendant Ph's house, he saw the defendant standing on the front porch. When approaching, defendant Ph moved to the street, using both hands to grasp at the position of the rear saddle, pulling D's bicycle, D continuously shouted: "Give me the car to go back," but the defendant did not say what. Defendant Ph pulled D into the back door area of ​​Mr. Ph's house to enter the house. Because he was afraid that defendant Ph would commit the same act of forcing himself as the first time (June 2019), child D constantly struggled, shouted, and asked the defendant to release his hand. But defendant Ph still pulled D into the house and then used his hands to push him down on the bed and then sat on top of his legs D. Although D shouted and begged the defendant, the defendant pulled his pants with both hands. , D's underwear and Ph's pants off, lying on top of D ...".

- Quote from the content: "Around February 2018, Huynh Huu Hh, Pham Thi P had a loving relationship. In many times of having sex with each other at Hh's house, Hh used mobile phones to secretly record scenes. By September 2018, it was discovered that Hh had an emotional relationship with another person, so there was a conflict between Hh and P; Hh sent sensitive pictures secretly recorded to P's facebook account. Upon discovering the pictures, P reported to the police agency to invite him to work, HH admitted the violation, committed not to repeat the offense, and P withdrew the request for handling. On December 25, 2018, Hh created Facebook accounts "Ax", "Ai", "Hh Linh", continued to send sensitive pictures secretly recorded of Hh, P, with words insulting the honor of P, to the accounts "TiP ê" of Nguyen Van TiP, "ChC" (Ex-husband; boyfriend of P), and created a Zalo account "NsT" to post sensitive pictures secretly recorded by Hh, P and spread online."