What crime does the sale of marijuana constitute in Vietnam? 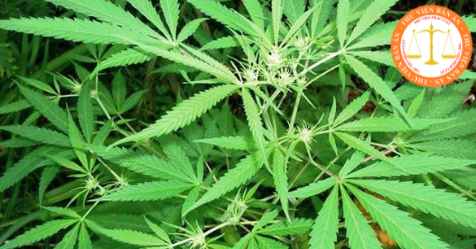 Marijuana is a plant that is used as a hallucinogen. There are many places in the world that allow the sale and use of marijuana for recreational purposes. Many Vietnamese people think that marijuana is not harmful, not addictive, and easy to buy and sell, so they trade marijuana to make a profit. They do not know that this illegal act of buying and selling drugs is strictly prohibited by law. So, how will the act of buying and selling marijuana be criminally handled?

At Judgment 38/2019/HSST dated February 20, 2019 of the People's Court of Bac Tu Liem District, Hanoi, the trial of illegal drug trading is as follows:

“On December 21, 2018, Bui Anh Q went to the social network Facebook to order 02 packages of marijuana, priced at 360,000 VND from an unknown person. After buying the drug, Q put it in his backpack and hid it at his place and sold it on Facebook for 200,000 VND/pack. On December 23, 2018, Nguyen Tien M used the account "Long Lam Li" to text and transact drugs by phone, to schedule a place to buy and sell drugs.

Around 13:00 on December 24, 2018, Q drove a Honda Wave Alpha BKS 30P6-2178 motorbike and brought 2 packs of marijuana drugs in his backpack to the meeting point at lane 180 Hoang Quoc Viet, Co Nhue ward, Bac Tu Liem district sold to M for 400,000 VND. Q took the money, before he could give drugs to M, he was caught red-handed. Exhibits seized: 2 white plastic bags inside containing dried herbs, 01 motorbike, 01 backpack, 02 mobile phones…”

The court declared defendant Bui Anh Q guilty of "illegal trading in narcotics" and sentenced him to 24 (twenty-four) months in prison.

Cannabis (Latin names: Cannabis, Marijuana; grass or hemp), is a genus of flowering plants used as a hallucinogen, stimulant, or medicinally. Currently, there are a number of countries in the world that have officially legalized the use of marijuana both in the medical and recreational fields, including Uruguay, Canada, and some US States. In addition, the legalization of cannabis in the medical field is still in other Central and South American countries such as Mexico, Ecuador, Brazil, Argentina, Colombia... However, the sale and use of cannabis in these countries is subject to tight government control.

In Vietnam, cannabis is classified in List I of drugs that are absolutely banned in medicine and social life according to Decree 73/2018/ND-CP stipulating the lists of narcotic substances and precursors. It is illegal to buy, sell, transport, possess and use marijuana in Vietnam. Especially for the sale and purchase of cannabis is an act that constitutes the crime of illegal drug trafficking, which is severely punished by law.

Specifically, the crime of “illegal trading in narcotics” is defined in Article 251 of the 2015 Criminal Code of Vietnam as follows:

1. Any person who illegally deals in narcotic substances shall face a penalty of 02 - 07 years' imprisonment.

2. This offence committed in any of the following circumstances carries a penalty of 07 - 15 years' imprisonment:

b) The offence has been committed more than once;

c) Narcotic substances are traded with more than one person;

d) The offence involves the abuse of the offender's position or power;

dd) The offence is committed in the name of an agency or organization;

e) The offence involves employment of a person under 16 for commission of the offence;

g) The offence involves a quantity of from 500 g to under 01 kg of poppy resin, cannabis resin or coca glue;

h) The offence involves a quantity of from 05 g to under 30 g of heroin, cocaine, methamphetamine, amphetamine or MDMA;

i) The offence involves a quantity of from 10 kg to under 25 kg of cannabis leaves, roots, branches, flowers, fruits or coca leaves;

k) The offence involves a quantity of from 50 kg to under 200 kg of dried opium poppy fruits;

The crime of illegally trading in narcotics is a crime that constitutes a formal crime, which means that as long as there is an act of illegally trading in drugs, the crime is completed. Constituting a material crime is a sign of crimes that cause serious, very serious to especially serious consequences for society. Thereby showing the state's recognition of the high level of danger of illegal drug trafficking compared with other acts that violate the drug regulations of the law.

Hopefully, this article will be a wake-up call for those who are intending to trade cannabis for profit.

For some judgments with the same content, please refer to: