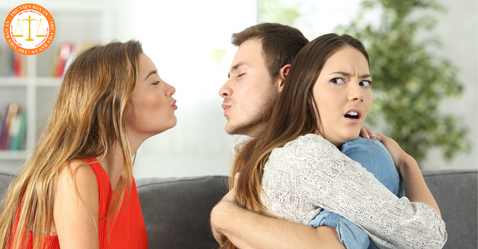 I read cases of "adultery" or violations of monogamy mentioned in the newspapers. So how do you handle the marital situation when one of the spouses is having an affair? "Anh Minh-Ha Nam, Vietnam"

Hi Anh Minh, The Editorial Board would like to answer your questions as follows:

Here is a summary of some judgments about this case:

- Quote from the content: "Based on the verification minutes, Mr. R's admission at the trial that Mr. R lived with another woman. Mr. R is no longer living in the family; his admission is consistent with the presentations of Mr. and Mrs. P, Tr, and M. This shows that Mr. R's affair is real. Mr. R violated Article 19 of the Law on Marriage and Family, was unfaithful, and lived with another woman while Mr. R had not terminated his marital relationship with Ms. Th. It was Mr. R who was partly to blame for the divorce, so when considering dividing the common property, the house, The trial panel considered Mr. R's fault as prescribed in Point d. Clause 2 of Article 59 of the Law on Marriage and Family 2019. Realizing that Mrs. Th and her children living in this house should request When it comes to dividing the common property, which is the house, Mr. R is entitled to share the house's monetary value as well as the house for Mrs. Th and her children to manage."Because Mr. R is at fault, consider allocating 40% of the house's common property value to Mr. R."

- Quote from the content: "During the time when the two people lived together, Ms. M was the one who was at fault, leading to the couple's conflict and divorce. Specifically, in the 12 photos provided by Mr. D to prove Ms. M's affair, Ms. M admitted that there are 3 photos of her and her boyfriend and many messages from Ms. M's phone. Therefore, Ms. M has violated her obligations and rights to educate her children as prescribed in Article 72 of the Law on Marriage and Family 2014. In addition, Ms. M has no evidence to prove her income. Considering that, Ms. M is not qualified to raise children according to the provisions of the law. Therefore, the Court decided: "Assign the common child named Le Phuong Th, born April 1, 2016, to Mr. Le Dinh D to directly raise it."

- Quoting the content: "During the settlement process at the first-instance court and at the appellate court, the involved parties all admitted that the husband and wife had a conflict since 2017. The reason for the conflict was that Ms. N suspected that Ms. Mr. V had an adulterous relationship due to their behavior, which led to the couple arguing and fighting. Ms. N asked the local government to deal with Mr. V's affair. The local government tried many times to reconcile Mr. V and Ms. N to mend their relationship but failed. In July 2019, Mr. V filed for divorce, Ms. N asked for a reunion, and then Mr. V withdrew his divorce application, asking the couple to think about reuniting to heal their feelings. But after returning to the couple, they could not improve their relationship and still had conflicts. Although husband and wife live in the same house, they cannot talk to each other. Ms. N determined that the husband-and-wife relationship no longer existed, and she accepted her current life, living separately, but did not agree to divorce so that Mr. V was responsible for the common child.

- Quoting the content: "During the process of living together, due to the husband and wife's incompatibility, Mr. T had an affair, so the husband and wife often had conflicts." Ms. X left the house many times, but then Mr. T and his family called, so Ms. X returned to reunite to raise children and take care of her sick father-in-law. From 2021 until now, Mr. T has often had an affair, so in October 2021, Ms. X left the family, and the couple has lived separately until now. Ms. X determined that the two's relationship had ended and asked for a divorce from Mr. T. During the settlement of the case, Mr. T also confirmed that because Ms. X did not allow him to have sex, he repeatedly had an affair outside.

Mr. Dinh Xuan H and Ms. Chu Thi Thu H1 identified life conflicts as a result of incompatibility and disagreements.Both sides doubted the other's loyalty but could not provide evidence. The couple determined that they had many conflicts and then reunited to continue living together, but not for long. The two have been living separately since July 2021; no longer caring about each other, Ms. H1 has moved with her children to her biological parents' house.