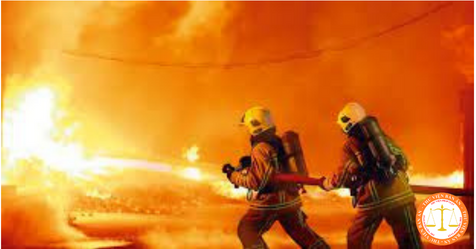 I have watched the fire at a karaoke bar in Hanoi that killed three firefighters, so I want to know the responsibility of those who caused the fire. Therefore, I hope LawNet give me judgments on violations of fire prevention and fighting regulations for my reference. Thank you! _ Anh Duong (Binh Duong)

1. Judgment 27/2017/HSPT dated August 1, 2017 on the crime of violating regulations on fire fighting and prevention

- Quoting the content: "About 14 o'clock on March 11, 2016, Mr. Tran Van H, the leader of the mechanical group of company N, told K:  "You go to the drying tunnel to see which one has a U-shaped iron, then cut it and make a pallet mould”. Then K told Mr. Tran Phuong N and Mr. Ha Van G to work in the same team because he know that this iron cutting job requires more people to do it. Mr. N and G brought an electric welding machine, K brought a welding rod and put it on a trolley to go to factory No. 3 of the Company. After connecting the power supply to the welding machine, K stood up on the stacks of wood and used a metal welding rod attached to the tip of the dot solder to cut off the two ends of the iron bar attached to the wall between tunnel 14 and tunnel 15. While K was cutting, Mr. G and N discovered the wood at the end of the tunnel adjacent to the wall of the tunnel No. 15 on fire and shouted "Fire, fire" because welding flakes shoot down on the drying wood area in cellar number 14 during iron cutting. They ran out of the tunnel to get a fire extinguisher to put out the fire and urged everyone to help, but the fire spread to the entire workshop 3. After that, K recognize that the welding machine was still in the tunnel, he ran into tunnel number 14 to bring it out and was burned on the backs of his hands, right ear, and right cheek. After that, K was taken to the emergency hospital and the fire prevention and fighting force of Bac Ninh Provincial Police came to fight the fire, but on March 12, 2016, the fire was brought under control.

- Quoted content: "Nguyen Anh T is the director of Chi Tai Company. Besides, Mr. H also leased the factory to Ms. Tran Thi Hue Minh and Mr. Tran Quang Hai as a place to produce and store scrap. Around 11 am on March 7, 2018, Nguyen Ngoc V used a metal steel rail cutter to cut the frame of the factory of Chi Tai company, cut adjacent to the Song Dat business household,when a fire occurred in the area of ​​a pile of rubber bales on the side of Song Dat household, close to the right wall separating the two facilities, then develop in all directions. A large fire spread and caused a fire in two adjacent plastic scrap factories next to Ms. Tran Thi HM and Mr. Tran Quang Hai. The above incident was discovered by Mr. Nguyen Van H and everyone, so he used a fire extinghuisher and informed the Police Department of Fire Prevention and Fighting to carry out the fire fighting.

3. Judgment 39/2020/HS-PT dated February 17, 2020 on the crime of violating regulations on fire fighting and prevention

- Quote from the content:  "Around 07.30, on June 28, 2019, Duong Van C cleaned his house. After cleaning, C collected garbage, which was rotted plastic bags and tarpaulins, about 10 meters away from the back of the house, and lit a fire to burn. At about 8:00 a.m on the same day, when he saw that the garbage was almost burned, C brought 3 buckets of water to the burning place to put out the fire. After observing that the fire was no longer red, C thought the fire was out, and then left the house. Around 9:30 a.m, neighbours discovered that the fire was on fire behind C's house, so they alerted the Fire Police to put out the fire. The fire caused the acacia forest behind C's house to catch fire and after inspection, it was determined that the actual burned area was 6,589 hectares of young acacia, eucalyptus and reed plants.

- Quote content: “In the morning of March 22, 2019, Lo Thi P and her husband, Mr. Ha Van T1 went to work on the family farm bordering the forest in zone M of sub-zone C, commune C. At about 13:00 on the same day, P and Mr. T1 rested and ate at the shack. After eating, P went to the toilet in the dusty area bordering the forest edge. In the process of going to the toilet, P was burned by ants, so he gathered the dried leaves into ant nests and then used a gas lighter to light the ant's nest. After burning the ant nest, P used a stick to beat the fire to extinguish the fire, while the red coal P did not extinguish it, but went down the street to go home with Mr. T1. When P was about 50m away from the location where the ant nest was burned, he turned back and observed that a small fire broke out. P thought that the small fire and the family's farm had been cleaned up, so it was unlikely that the fire would spread into the forest. Then P goes to where Mr. T1 waits, Mr. T1 asked P why he lit a fire, but P told Mr. T1 about burning the ant nest and Mr. T1 said nothing. Then Mr. T1 drove a motorbike to carry P to Moc Chau District General Hospital to visit his sick mother. After P and Mr. T1 returned, the fire spread to the forest area M of sub-zone C, commune C and the forest of village L and V of M commune, district M. Then People discovered a forest fire, so they reported it to the authorities to organize fire fighting and investigate the incident. By 20:30 on the same day, the fire was extinguished.”

5. Judgment 05/2020/HS-ST dated June 9, 2020 on the crime of violating regulations on fire prevention and fighting

- Quote from the content:  "At 13:30, on July 10, 2019, Dinh Van H, Dinh Van B, Dinh Van Tr, Dinh Van Tr1, Dinh Van T and Dinh Van H were exploiting glue for Mr. Huynh Van. Th. Huynh uses a chainsaw to cut trees. Tr, T and H use a machete to spread the glue branch, then Tr1 and B peel off the glue. At 14 hours of rest, Dinh Van B saw that there were many vines and bushes hindering the exploitation of acacia, so he decided to use fire to make it convenient for exploitation. B took a lighter and walked up a distance of about 01 to 02 meters from everyone and saw a pile of dried acacia leaves and turn on the lighter. At this time, it was hot and windy, causing the fire to spread quickly to other areas. B, H, Tr, Tr1, T and H together put out the fire, but because the fire broke out too big and spread, it couldn't put out the fire, leading to a forest fire.

6. Judgment 39/2017/HSST dated November 22, 2017 on the crime of violating regulations on fire fighting and prevention

- Quoted content:  "On August 11, 2017, Phan Thanh T together with Nguyen Van H7, Nguyen Van N1 invited each other to go to the area of ​​S mountain in village B2, commune S to find a bee hive. When going to the M dam near S mountain, N1 stood below and T and H7 went up to S mountain, meeting Mr. Pham Duc T3 and Mr. Nguyen Dinh L2 were clearing forests there. Here, T and H7 found a beehive, but they did not burn and went down to where N1 was waiting because there were many dry leaves around for fear of forest fire. Then Mr. H7 went forward while T continued to invite N1 to the mountain to find a bee hive. when T discovered a beehive, he went close and took a dry pine branch about 1m long, tied a few dry leaves to the top of the pine branch and then lit a gas lighter to burn. Due to the hot, dry weather, strong wind blowing, around the beehive there are many dry branches and leaves, the fire spread to the surrounding area when he burns the beehive. Seeing the large fire spreading to the surrounding areas, T called N1 along with Mr. L2 and Mr. T3 to extinguish the fire together. After that, T continued to call people and authorities in S commune when there was a forest fire to come in and put out the fire. By 3 p.m. the same day, the fire was extinguished. The scene determined that the burned forest area was 19,670 m2 ..”

7. Judgment 12/2021/HS-ST on violation of regulations on fire prevention and fighting

- Quote content: “On March 11, 2021, AP cleared the field and built a fire barrier between the family's field and the pine tree forest (6 years old) which has the function of production forest, at plots 5 and 8, sub-zone 288 Forest stand is managed by Dak To Forestry One Member Limited Liability Company. At about 14:00 on the same day, seeing that the sky was overcast, AP used a lighter to burn hay on the side adjacent to the pine forest, however, because the fire line was unsafe and careless, AP did not notify the authorities,  although it has been propagated and disseminated before, the provisions of the law on forest fire prevention and control. At about 15:00, the fire spread to the border of the fire barrier with lots of dry grass and strong wind blowing, creating many embers that flew into the pine forest, leading to a forest fire. At the conclusion of the judicial assessment of the Kon Tum Provincial Forest Protection Department, the number of damaged three-leaf pine trees was determined by 3,038 trees, the damaged area was 2.66 hectares."