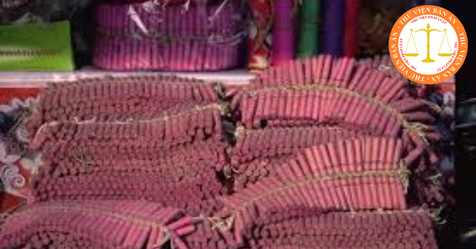 Although every New Year comes, Vietnamese authorities organize fireworks at certain locations to serve the people's needs for the spring celebration, however, there are still many people who arbitrarily buy, sell and set off firecrackers at home without knowing that they can be administratively sanctioned or be prosecuted for criminal liability.

Typically, the judgment 29/2017/HSPT dated 17/07/2017 by the People's Court of Son La province hearing the case has the following contents:

On January 8, 2017, T and his wife, Nguyen Thi Mai A, went to Lang Son to attend the anniversary of Mai A's father, then T asked to buy 07 36-tube artillery rigs; 02 rigs of 100-tube artillery with the price of 1,450,000 VND, the purpose is to burn on the Lunar New Year of the Rooster Dinh Dau. At 00 o'clock on January 28, 2017, T alone went to the rooftop to use a gas lighter to burn 09 artillery pieces, when the firecrackers exploded into the sky, making a loud explosion, he was caught red-handed by the MC District Police Task Force. At the first-instance criminal judgment No. 87/2017/HSST dated April 4, 2017 of the People's Court of MC district, Son La province, Based on the Minutes of Unsealing to determine the types of exhibits, weighing and sealing the exhibits dated January 28, 2017 of the Market Management Team No. 3, the seized exhibits were firecrackers and declared: defendant Ngo Quang T committed the crime: Disturbing public order.

Compared with the provisions of the Vietnamese law, there are two types of firecrackers: firecrackers and fireworks (based on Decree 36/2009/ND-CP ).

For the fireworks on the Lunar New Year organized by organizations and localities according to regulations (based on Clause 1, Article 8 of Decree 36/2009/ND-CP). Therefore, people are not allowed to arbitrarily make fireworks.

For firecrackers, anyone who sets off firecrackers in the cases specified in Section II of Joint Circular 06/2008/TTLT-BCA-VKSNDTC-TANDTC will be examined for penal liability.

- If the type of firecracker that T fires is fireworks, then T will only be administratively sanctioned as mentioned above, but not prosecuted for criminal liability because T did not injure anyone or cause harm in the process of setting off firecrackers. any serious consequences;

- If the type of firecracker that T burns is a firecracker with a mass of 11.04 kg and has been seized, then based on Point d, subsection 2, Section II, Joint Circular 06/2008/TTLT-BCA-VKSNDTC-TANDTC, T will be prosecuted for criminal responsibility for the crime of disturbing public order.

In conclusion, to be able to both enjoy Tet and ensure we and our loved ones avoid legal troubles, each person needs to have a certain understanding of the law on the use of firecrackers of Vietnam.