Land invasion can be prosecuted for criminal liability in Vietnam 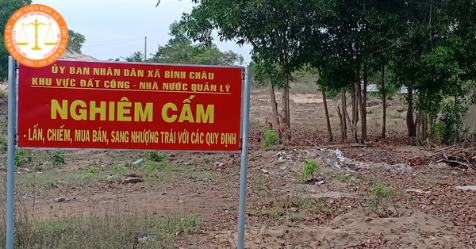 Dispute over land invasion are not uncommon in the practice of dispute settlement. Land invasion can be administratively sanctioned with remedial measures. However, at a higher level, this behavior can be prosecuted for criminal liability for violating land use regulations. So in what case can land invasion be sentenced to imprisonment in Vietnam?

Decree 91/2019/ND-CP of Vietnam (amended and supplemented by Decree 04/2022/ND-CP) explains the act of land invasion, land appropriation as follows:

Land invasion refers to displacement of markers or boundary of a plot by a land user to expand his/her land area without permission of a land regulatory authority or legal user of that invaded stretch of land.

Land appropriation refers to one of following cases:

+ Deliberately use land without permission of land regulatory authorities; or

+ Deliberately use land legally owned by other organizations or individuals without permission thereof; or

+ Use land on the spot without completing procedures of land allocation or lease as per the law.

Violation of land invasion, land appropriation can be administratively fined up to 500,000,000 VND for individuals and 01 billion VND for organizations or even considered as criminal liability for violation against land use rights.

Article 228 of the Criminal Code 2015 provides for this crime as follows:

"1. Any person who appropriates land, transfers land use right or uses land against regulations of law on management and use of land despite the fact that he/she has incurred an administrative penalty or has an unspent conviction for the same offence shall be liable to a fine of from VND 50,000,000 to VND 500,000,000 or face a penalty of up to 03 years' community sentence or 06 - 36 months' imprisonment.

b) The offence has been committed more than once;

Please refer to some judgments on violation against land use right below.

Huynh Van N and his wife Le Thi Q have a contract to transfer land use rights in 02 land parcels 44 and 48 to Mr. Tran Van M. N. Howevet, Q have arbitrarily invaded on the horizontal area of ​​​​about 04m, about 10m long. While settling the dispute, The People's Court of Vinh Long province declared: Forcing Mr. Huynh Van N and Ms. Le Thi Q to return Mr. Tran Van M the invaded land area of ​​32.7m2. However, because N did not execute the judgment, Binh Tan District Civil Judgment Execution Sub-department carried out procedures for coercive judgment enforcement. After allocating the land, defendant N continued to invade on a portion of that land and prevented Mr. M from using the land. On June 4, 2018, the Chairman of Binh Tan District People's Committee issued a decision on administrative sanctions against N's violations. On April 22, 2019, Tan Hung Commune People's Committee discovered and made a record of defendant N constructing floor for a house on the land that N invade. On August 14, 2019, the Criminal Investigation Agency - Binh Tan District Police initiated a case and prosecuted the accused against Huynh Van N for the crime of "violating regulations on land use".

The People's Court of Vinh Long province decided: To sanction defendant Huynh Van N: 06 (six) months in prison for the crime of "violating regulations on land use".

Truong Thi Ngoc T invade on other land, illegally using the land owned by Mr. P - Mrs. D. The area of ​​3,001m2 of the invaded land belongs the land which Mr. C - Mrs. T received from Mrs. Dinh. Thi Ngoc Ng. In 2007, because Phan Thu H could not pay the debt to Ms. Duong Thi M, so the she filed a lawsuit at the People's Court of An Phu district. At the execution stage, the entire area of ​​5001m2 above got liquidated, in which: 2,000m2 was bought by Mr. Ho Minh P and 3,001m2 was bought by Ms. Duong Thi M and Mr. Nguyen Ngoc T. When specialized agencies assigned land to buyers for judgment enforcement, the defendants did not comply and continued to occupy for many years. The People's Committee of V.L Commune issued a Decision on sanctioning administrative violations against the defendant, but the defendant continued to illegally occupy the land to cultivate rice.

The People's Court of An Giang province decided: Sanction: Defendant Truong Thi Ngoc T 03 (three) months in prison for the crime of “violating regulations on land use”.