How to solve the private interests of the parties when building a house on a common path in Vietnam? 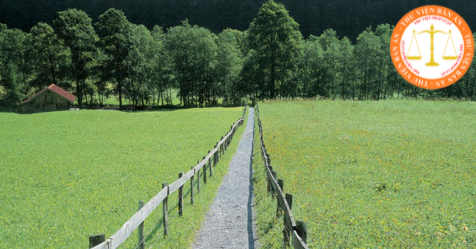 The common path is a small piece of land, but it can affect many people living around. Many households have conflicts with each other because of only one path, affecting the neighbourly relationship. Some families even build structures, build fences around to prevent others from passing through that part of the land. So what happens when the interests related to the common passage are violated? Especially when there is a house built on the common path, how will it be solved?

Typically, in the judgment 230/2018/DS-PT dated November 22, 2018 of the People's Court of Ca Mau province, the first-instance trial of the case of the dispute over the aisle between plaintiff Mr. Lam Van T and Ms. Duong Thanh H with defendant Mr. Tran Tai T, Ms. Tran Kim H as follows:

"The land in dispute between the involved parties is determined to be a road with a width of 04m. This land belongs to the parcel of land 234 owned by Mr. T and Mrs. H in the land use right certificate with an area of ​​275m2. According to measurements is actually 278.1m2, built by Mr. T and Mrs. H to rent out a house for Ms. Nguyen Thi Ch.

The disputed land is currently a public walkway, shared by the plaintiffs and many households living in the alley, which has been legally effective by the appellate judgment No. 197/2002/PT-DS. Ms. Th and Mr. T are the executors who have completed this judgment, but on April 21, 2014, Ms. Th and Mr. T transferred the shared walkway land to Mr. T and Ms. H with an area of ​​275m2 on the land is the common path. Mr. T and Ms. H requested the replacement of land use right certificates in the names of Mr. T and Mrs. H. Because Mr. T and Mrs. Th did not provide the appellate judgment No. 197/2002/PT-DS of the People's Court of the People's Court. In Ca Mau province, the Land Registration Office does not know the land use situation according to the judgment. Therefore, Mr. T and Ms. H were granted land use right certificates. After obtaining the land use right certificate, Mr. T and Ms. H applied for a construction permit and were approved by the People's Committee of City C. Since then, Mr. T and Mrs. H have built a house on the land that is licensed to build, making the plaintiffs and some households in the alley have no way to go to Nguyen Tat Th street.

Forcing Mr. Tran Tai T and Mrs. Tran Kim H to dismantle all the houses and structures built on the land at parcel 234.

2. The location and the length, width and height of the passage shall be agreed by the owners in order to ensure convenient passage and minimize inconvenience to the parties. If there are any disputes regarding the passage, the parties may request the authorized State body to resolve.

3. Where immoveable property is divided into more than one portion for different owners or users, upon division, necessary passages must be provided, without compensation, to persons in the interior as provided in Clause 2 of this Article.

Understandably, the common way is in the case when a real estate is surrounded by other real estate without a way to the public road, he will have the right to ask the owner of that enclosed real estate for give themselves a path on their land for ease of travel, and that passage shall be shared by the person whose property is besieged and the owner of the property adjacent to it.

In this judgment, although they have been granted a certificate of land use rights and a permit to build a house, this land has been declared by the court to be the previous common path, so Mr. T and Mrs. H could not build a house or other construction on top. This construction affects the interests of other households. Therefore, forcing Mr. T and Mrs. H to dismantle the house on the shared land and return the shared land to everyone.

In fact, disputes arising related to the common passage are quite common. When this dispute arises, families should first reconcile themselves. If conciliation is not possible, a written request for conciliation may be submitted to the People's Committee of the commune, ward or township where the disputed land is located. If the conciliation fails, then file a petition to the People's Court of the district where the land parcel is located to request settlement.