Comment on Criminal Precedent No. 01/2016/AL on Murder case in Vietnam 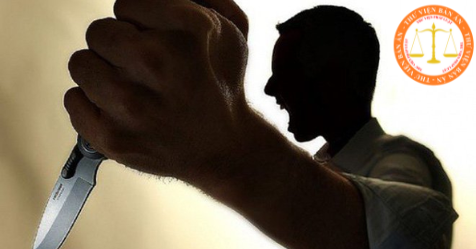 Those who commit murder in one of the following cases shall be sentenced to between twelve and twenty years of imprisonment, life imprisonment or capital punishment:

n) Has a hooligan character…”

“Article 104. Crime of intentionally causing injury or causing harm to the health of others

… Committing the crime of causing injury or harm to the health of others with an infirmity rate of 61% or higher or leading to death or 31% to 60%, but falling into one of the cases specified in Clauses 1 and 2 of this Article. Points a to k, Clause 1 of this Article, shall be sentenced to between five and fifteen years of imprisonment."

1.2. The need to publish precedent

The 1999 Penal Code stipulates the crime of murder (Article 93) and the crime of Intentionally inflicting injury on or causing harm to the health of other persons as “injury resulting in death" (Clause 3, Article 104). These two crimes have many signs constituting the same basic crime such as: Both have objective acts of hitting, stabbing, slashing, shooting...; As a result, the victim dies. The distinction between these two crimes is mainly based on the subjective consciousness of the offender. Trial practice shows that, in many cases, it is very difficult to identify the two crimes mentioned above because it is difficult for the procedure-conducting agencies and persons to determine the subjective consciousness of the offender and in fact, the basis for determining the subjective consciousness of the offender is mainly based on the assessment of the external objective manifestations of the criminal act.

The Supreme People's Court's selection and publication of Precedent No. 01/2016/AL aims to clarify the difference between the crime of murder and the crime of intentionally causing injury with aggravating circumstances framed as "injury resulting in death". The typical legal sign to distinguish between these two crimes is the defendant's subjective sense of purpose to deprive others of life or only the intention to cause injury to others, whether they see or are forced to do so. Did you foresee fatal consequences?

1.3. The content of the case and the situation of the precedent

In the cases creating Precedent No. 01/2016/AL, defendant Dong Xuan Phuong hired Hoang Ngoc Manh and Doan Duc Lan to beat Mr. Nguyen Van Soi for revenge by stabbing Mr. Soi's legs and arms with a knife to cause injury. Manh then stabbed him twice in the back of the right tail, killing Mr. Soi. The conclusion of the examination showed that Mr. Soi had 02 wounds on the back of his right thigh, the upper wound penetrated the thigh muscle 3cm, the lower wound cut off the artery, vein, and posterior thigh, causing a lot of blood loss. The cause of death was an irreversible shock caused by an arterial wound. Doan Duc Lan and Hoang Ngoc Manh have fled and are wanted.

This precedent is looking at the criminal responsibility of the mastermind in a criminal case involving accomplices. In this case precedent, the Judicial Council of the Supreme People's Court based on the defendant's subjective sense of the desire to deprive the victim of the victim's life and externally demonstrated objective behaviour for that subjective consciousness to determine whether the defendant commits murder or intentionally causes injury with the framing of “injury leading to death”.

In this case, the instigator does not intend to take the victim's life, so he only asks the practitioner to cause injury to the victim's legs and arms; does not require the person to carry out the attack on the vital parts of the body which, if attacked, will be more likely to harm the victim's life. The practitioner did exactly as requested by the mastermind, but then the victim died due to sudden blood loss due to the involuntary blood loss of the mastermind…The instigator is only criminally liable for the crime of intentionally causing injury with the framed circumstance as "causing injury leading to death" but not criminally responsible for the crime of murder.

Precedent No. 01/2016/AL was formed on the basis of a case involving an accomplice and the person being prosecuted for criminal responsibility as the mastermind. However, the essence of determining whether the defendant is guilty of murder or intentionally causing injury with the framing of "injury resulting in death" is that determining the defendant's subjective consciousness has whether the intention is to take the victim's life or not and the objective behaviour proves the subjective consciousness of the defendant, regardless of whether the defendant is the instigator or the practitioner. Therefore, this precedent situation should also be applied to the case where the case has no accomplices. If it is proved that the person who committed the offence did not intend to take the victim's life, when causing injury, the defendant did not attack the vital parts of the body that are likely to lead to death.

However, when considering this case law, there are many different opinions. The view that the accused were hired to cause injury is currently on the run, has not been caught. The determination of the crime against the tenant who commits the crime of intentionally causing injury leading to death is mainly based on the defendant's testimony and the appropriateness of the location of the injury. There is no basis to determine the subjective consciousness as well as the complete objective behaviour of the hired person when committing the crime. Therefore, this case precedent is not a comprehensive legal solution, which is susceptible to change if the defendants are caught running away and other circumstances appear to be different from the case being tried. In particular, it is difficult to understand what "ensures that cases with the same legal facts and facts must be resolved equally" in order to apply the trial of similar criminal cases as prescribed in Clause 3, Article 2, Resolution No. 03/2015/HDTP.