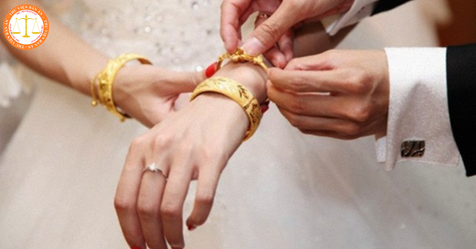 "Ms. Ha Lam-Khanh Hoa, Vietnam" My sister and brother-in-law often have conflicts and are in the process of getting a divorce. However, my brother-in-law demanded the return of the bride's wedding money to the bride's family before he accepted the divorce. However, this money was used to pay for the wedding ceremony. So, does my sister have to return the above amount?

Hello, Ms. Lam. The LawNet Editorial Board would like to answer your questions as follows:

Reclaiming the bride price can be seen as a negative reality in Vietnamese society today. In fact, there are many people who think that bringing the bride's mother to the bride's house is a ritual when making an engagement. Therefore, if a divorce occurs, there is no longer any reason for the groom's family to lose that amount.

According to civil law, the gift of wedding money is in the form of a contract for gifting of property. The gift of a wedding gift upon marriage is agreed upon by the two parties on the amount and form of giving and no other conditions. Therefore, according to Articles 457 and 458 of the Civil Code 2015, this donation takes effect from the time the bride's family receives the bride's wedding gift and establishes the ownership rights of the bride's family. For the above reasons, the request to reclaim the property will not be accepted by the Court.

For settlement of a marriage and family case or matter applying practices, conciliation shall be conducted in accordance with the law on grassroots conciliation. Prestigious persons in the community or religious dignitaries shall be encouraged to participate in the conciliation.

In case the conciliation fails or the marriage and family case or matter applying practices falls outside the scope of grassroots conciliation, a court shall settle that case or matter in accordance with the law on civil procedure.

In Clauses 1 and 2, Article 2 of this Decree, the applicable custom must be a code of conduct consistent with the provisions of Clause 4, Article 3 of the Law on Marriage and Family. That is, the marriage and family custom must be the code of conduct; it must have clear content on the rights and obligations of the parties in the marriage and family relationship; it must be repeated over a long period of time; and it must be widely recognized in a region, country, or community.

Therefore, the application of the custom must comply with the conditions specified in Article 7 of the Law on Marriage and Family 2014 (Vietnam). According to the list of outdated practices on marriage and family that need to be campaigned to be abolished or banned, the custom that when a divorce is requested by the wife, the bride's family must return all the bridesmaids and other expenses, and children must follow their father is a custom that needs to be abolished. Therefore, the above practice will not be considered and accepted by the Court to settle divorce cases.

-Quoting the content: "Mr. D and Ms. P are not free to get to know each other, due to the matchmaking of both sides of the family and the wedding ceremony according to traditional customs, with marriage registration at the People's Committee of K commune, district T, Lang Son province. In 2009, the couple started to have conflicts because Ms. P had feelings for another man. Mr. D used force against Ms. P, and the couple had been separated since 2009. Now he has determined that the couple's love is no longer there. Ms. P left Mien Mien from 2009 until now, not caring about her children. He is raising two children by himself. Ms. P asks for a divorce, and he agrees, but he asks Ms. P to pay him 40,000,000 VND for raising two children and 40,000,000 VND for the wedding day.

"After a period of research, Mr. and Mrs. Ma Thi H voluntarily married each other, held a wedding ceremony according to customs and practices, and registered the marriage at the People's Committee of T commune, Van Quan district, Lang Son province. After getting married, he and his wife did not have any major conflicts during their marriage. Ma Thi H asks for a divorce, and he agrees, but on the condition that Ma Thi H has to pay him a bride price of 20 million VND. The compensation for his children's mental loss is 50 million VND.

-Quote from the content: "I found out that Ms. T often texted and called with other men. He reminded her, but Ms. T didn't listen, so they argued again. About 3–4 months later, Ms. T said she moved to Bac Giang province to work as a worker. He disagreed, but Ms. T still went. Since then, feelings began to fade. He went to Bac Giang with Ms. T, and Ms. T chased him away. Currently, his feelings for Ms. T are no longer available, but he only agrees to divorce when Ms. T pays him the amount of money his family brings to Ms. T's house, and he will return all the wedding gifts. T's sister brought it to his house when she got married. The bride's wedding gifts brought to Ms. T's house include: rice, wine, chicken, pork, banh xeo, expenses for the engagement ceremony, transportation, wedding challenge, etc., with a total amount of VND 36,010,000.