05 judgments on violations of food safety regulations in Vietnam 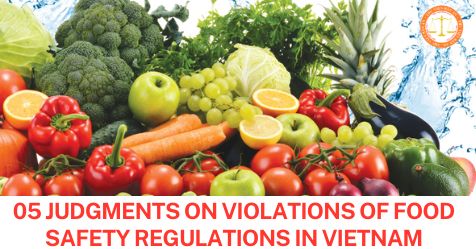 Recently, dirty food and dirty meat is an alarming problem. Since then, the issue of food safety has also received more attention because it is directly related to the health and life of users. Therefore, in Article 317 of the Criminal Code 2015 of Vietnam, amended and supplemented in 2017, the maximum penalty for this type of crime can be up to 20 years in prison.

Here are five sentences for violations of food safety regulations:

Case summary: Starting in 2019, N had an intention to buy pigs that died due to the disease for slaughter and then sell them to consumers. The origin of pigs that died due to disease N bought from the pig farm for 50,000 VND / 1 head, about 20 kg. After buying it, N slaughters it, puts it in styrofoam boxes, and then sells it to consumers at prices ranging from 40,000 VND to 50,000 VND/kg. On February 13, 2020, the working group of the Environmental Police Department of the Dong Nai Provincial Police Department coordinated with the People's Committee of Commune B to check house N, and detect and seize the evidence.

Case summary: Hoang Thi T's household has been producing and trading pork rolls since 2015, but has not registered with the competent authority. On October 19, 2019, T received the production of more than 100kg of pork rolls and pork rolls for 03 guests to make a wedding feast, each person had to pay a deposit of 500,000 VND in advance and promised to deliver the goods in the morning of October 20, 2019. During the grinding process, T added borax to raw meat to grind together, then wrapped and boiled. Around 5 am on October 20, 2019, the inspection team checked the T's family's sausage production facility and the team found that some samples of spring rolls were positive for the cold. The inspection team made a record according to regulations.

Case summary: Around May 2015, Nguyen Thi H worked as a producer and trader of alcohol but did not register the business. By the beginning of 2016, H bought plastic cans of 05 liters, 10 liters and 20 liters, 500ml Lavie plastic bottles, and Hanoi wine bottles from scrap shops and then hired Ms. Nguyen Thi T to shovel, wash and clean the bottle; hired Mr. Luu Duc T to print labels of all kinds: "Heirloom wine, Duy Hao sticky rice soaked in the land"; Heirloom wine - Glutinous wine soaked in the land of Duy Hao"; “Heirloom wine - Duy Hao cat cider”; "Duy Hao banana wine" on all kinds of labels printed with information such as: "phone number 01688058572, address: CD, CK, TO, Hanoi. Ingredients 100% glutinous rice and traditional yeast. In 2007, Ms. Nguyen Thi L often retailed H's alcohol. On February 28, 2017, H delivered and sold 05 bottles of wine to Ms. L. At about 17:30 on the same day, Mr. Nguyen Minh K and his son went to eat at Ms. L's restaurant and Mr. K drank 02 cups of white wine, H's wine. After eating and drinking, until 6:00 on March 1, 2017, Mr. K was brought to the Hospital for emergency transportation in a coma, with blue skin, pale pink mucous membranes, no enlarged thyroid gland, and no pain in the peripheral lymph nodes; definite diagnosis: acute methanol poisoning.

Case summary: On April 13, 2018, PC05 Division of Ho Chi Minh City Police conducted an inspection of agricultural product processing facilities at the address: F Street 2, KP 5, Ward TB, District X, Thanh M street owned by S, discovered that S's establishment had the act of washing food (radish) with chemicals; should seize the evidence and make a working record for S. On June 8, 2018, PC05 Division transferred the file to the Thu Duc District Police to investigate and handle the act of “Violation of regulations on food safety. products” for S.

Summary of the case: At about 06:30 on October 19, 2020, the investigative police agency of Cam Le District Police discovered at the address of 635 T Street, Ward H, District C, Nguyen Van H, and Pham Thi H were delivery 01 sack of goods, inside contains 50 packages of seasoning seeds of different weights. After further checking in Mrs. H's warehouse, she discovered many bags, packages of seasoning seeds, monosodium glutamate, and many tools used for extraction and packaging. Through the investigation, Pham Thi H contacted a woman named "Th" to buy 30 bags of SAKURA seasoning seeds as input materials for the production of counterfeit goods. At the same time, H bought Knorr-branded seasoning packaging and Aone-branded monosodium glutamate (MSG) to extract and pack seasoning and MSG into Knorr and Aone-branded products for consumption on the market.