05 judgments on using fake documents to commit crimes in Vietnam 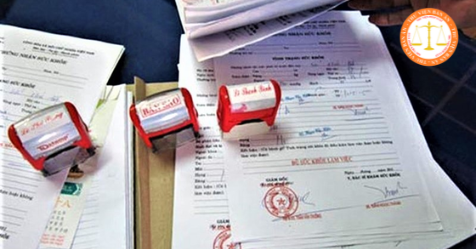 Along with the development of society nowadays, the practice of individuals committing crimes is increasingly sophisticated and cunning. It is not difficult to make some fake papers and documents like real documents.

The following are 05 judgments on forging documents of agencies or organizations for personal gain, specifically:

- Summary: on January 14, 2019, at the Notary Office, defendant Nguyen Ngoc M used the faking certificate of ownership of houses and properties on land named Nguyen Ngoc M to notarize the loan contract with Mr. Lam Thien Ph as agreed with Ms. Nguyen Thi Hanh H, but it was discovered that the contract was not notarized.

2. Judgment 79/2020/HS-ST dated September 24, 2020 on the crime of using fake documents of agencies and organizations

- Summary: Ho Ngoc H works as a driver and was granted a Class A1 and C driving license by the Department of Transport of Quang Tri province in 2003.In 2015, H had a traffic accident and became severely disabled, but continued to practice driving to earn a living. In 2017, H intends to upgrade his driver's license to class E to be able to drive a passenger car, but due to his disability, he is not eligible to study and take the upgrade test. Hoang meets a man, H provides personal information and a photo of his card and will give him a class E driver's license without passing the test (fake driver's license). H agreed to buy a fake driver's license for VND 2,000,000. On October 16, 2019, Ho Ngoc H used a fake E-class driver's license to deceive the Traffic Police in order to escape. avoid punishment.

- Summary: On October 3, 2018, Nguyen Anh D bought 01 Yamaha Nouvo-branded motorcycle worth VND 19,500,000, D was granted a certificate of registration of motorcycles bearing the license plate number 66C1-136.38.Then, D mortgaged the above vehicle registration certificate to borrow VND 19,500,000 in installments to Vietnam Prosperity Bank. In December 2018, D brought a motorbike with license plate number 66C1-136.38, then went to Phuong T pawn shop and got 4,000,000 VND. In early April 2019, D agreed to sell a motorcycle with license plate number 66C1-136.38 to Mr. Phan Huu T, the amount of VND 12,000,000, Mr. T brought VND 4,000,000 to the pawn shop Phuong T to redeem the car on behalf of D, D hands over the car to T for management and use, but has not yet handed over the vehicle documents. Because there is no money to pay the bank to get back the car documents, D makes a fake car license in the amount of 500,000 VND and gives it to Mr. T. During the process of management and use, Mr. T discovered that the vehicle registration certificate was fake, so he went to CL District Police to denounce D's behavior.

- Summary: On March 12, 2020, Nguyen Van L logged into the Facebook account "Specialized in Vinh Phuc Apples" and contacted Ha Thi A's Facebook account "A Ngoc" to ask A to buy 04 fake medical examination papers for 80,000 VND/sheet. On March 16, 2020, when A and L were exchanging and buying fake health certificates at the gate of Thuy L company, they were discovered by the police force of the L district.