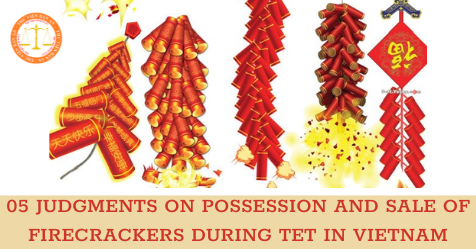 The act of trading firecrackers in the days leading to the Lunar New Year in Vietnam is quite complicated year by year which creates danger, and fear for people about accidents. Moreover, in fact, that danger has happened, leaving tragic consequences and accidents. Therefore, this behavior needs to be dealt with strictly to set an example for others.

Below, is a summary of some trial sentences for illegal possession and use in Vietnam, please refer.

- Quoting the content: "About 18 o'clock on December 31, 2018 received information from the public about some subjects who are possessing firecrackers and explosives, the Quy Hop District Public Security Working Group carried out identification In the morning, they checked at the house of Mr. Truong Trung T, born in 1985, in D hamlet, Th commune, Q district, Nghe An province, and discovered that Dao Sy M was storing 25 sealed transparent plastic bags, in each bag contains many plastic spheres, ball-shaped, colorful, on each block, is attached a piece of blue string (suspected of exploding firecrackers) and 04 square blocks, each block is connected by 36 circular cylinder wrapped in paper with many colors and foreign words (Due to firecrackers).”

- Quote from the content: "Due to the need to use explosive fireworks during the Lunar New Year, around mid-January 2021, Nguyen Van Q used a personal facebook account named "Quyen Nguyen" to enter the advertisement page selling firecrackers on the social network, Quyen found an address for selling firecrackers, so he sent a comment with the need to buy firecrackers and left Quyen's phone number on it. Q and the man agreed to buy and sell 07 artillery sets of 36 types for VND 5,600,000 and schedule a time and place for delivery.

4. Judgment on possession of prohibited goods

- Quote from the content: "The number of firecrackers seized on November 9, 2020 was purchased from a man named Vinh at the junction of Dien Chau town, Dien Chau district, Nghe An province for 22,500,000. VND on the morning of November 9, 2020 for the purpose of using on Christmas, New Year and Lunar New Year. By appointment, on the evening of November 9, 2020, Vinh brought firecrackers to the gate to greet Q commune and at 19.30, D used a Janus motorbike which is the property owned by Ms. living as husband and wife with Doan) carrying 03 boxes of firecrackers to hide under the shampoo chair at the hair-washing kiosk that D and Ms. Th rented.

- Quoting the content: "Le Thi Bich L drives a motorcycle BKS 76H1-372.xx from her house to L's warehouse in L-P, on the way, L bought 11 cannons for 4,400,000 money from a young man about 30 years old (unknown identity), when buying L, he put 11 firecrackers in 03 black plastic bags to avoid detection, and then drove the car to transport the fireworks to Vo Thi Bich V's house (daughter) from L), L borrowed V 500,000 VND to go to the doctor the next day, then drove a firecracker truck to his warehouse to store it for the purpose of use and for acquaintances to use during Tet.