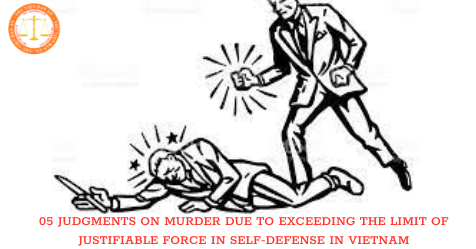 According to Clause 2, Article 22 of the Criminal Code 2015 of Vietnam, unjustified force in self-defense means the use of force which is more than reasonably necessary and not appropriate for the nature and danger to society posed by the infringement.

When a person is infringed upon in their legitimate interests, they have the right to fight back, but the resistance must be at the level equivalent to the infringement guilty of murder for exceeding the limits of legitimate defense.

The level of punishment for murder for exceeding the limit of legitimate defense is specified in Article 126 of the Criminal Code of Vietnam as follows:

“Article 126. Involuntary manslaughter because of the use of unjustified force in self-defense or while capturing a criminal

1. An involuntary manslaughter because of the use of unjustified force in self-defense or while capturing a criminal carries a penalty of up to 02 years' community sentence or 03 - 24 months' imprisonment.

2. The involuntary manslaughter of 02 or more people, in this case, carries a penalty of 02 - 05 years' imprisonment."

Here are 5 murder convictions for unjustified force in self-defense

+ Summary: At 1:00 am on October 22, 2018, Nguyen Van H and Tsen Vinh H went to defendant Tran Duc T's duck porridge shop to buy a drink, when a conflict occurred, H used his feet to kick the defendant T, causing the defendant to fall, and then hit the defendant with a chair, then the victim H entered the house holding a knife, clamped the defendant's neck with his hands and feet grabbed the knife on the table and stabbed H once in the right flank. As a result, victim Tsen Vinh H died.

+ Summary: On March 8, 2019, Dang Quoc K asked Pham Thanh H and Nguyen Hoai D to go out, and then went to find Pham Xuan T, K asked T to repay the debt but T thought that he did not owe K. So the two sides clashed, K took a knife from the trunk of the car and put it in his pocket. After K's car key was snatched by T, K ran away to Mr. C's house, but his house locked the gate, so K returned. On the way back, he saw Dang Quoc K holding a piece of wood and a hoe, Dang Quoc K approached, threw the piece of wood into Pham Xuan T's right hand and used a pickaxe to hit Pham Xuan T's body several times. Pham Xuan T used his right hand to support, then took out the knife, and proceeded to stab several times in the direction of Dang Quoc K. As a result, Dang Quoc K died before being treated.

+ Summary of content: At about 6:30 pm on September 20, 2018, L was driving a tractor, while stopping at a red light, L saw Mr. Nguyen Dinh H stopping the car in front of L's car. When the green light turned on, Mr. H did not drive the car,  L honked the horn repeatedly signaling Mr. H to move the car when suddenly Mr. H rushed to the cabin platform with a knife to stab L's left ear with a knife once. Mr. H pulled L out of the car and stabbed L once in the chest. After a while, L stabbed Mr. H in the back once, Mr. H continued to use a knife to stab L's left hip with a knife, L also took a knife to stab him once again, hitting Mr. H's left-back. Consequences: Mr. H died at the scene.

4. Sentencing for murder by exceeding the limit of legitimate defense No. 35/2018/HSPT

+ Summary of content: On December 5, 1993, H1 went to Mr. M's house to ask him why he didn't send his children to school. There was an argument with M, then Mr. M took a milling knife and slashed H1 into his left ear, M slashed the second time, then H1 caught Mr. M's hand and then both sides hugged each other and fell to the ground. During the struggle, H1 took M's knife and then both stood up to face each other for about 01 meter. At this time, M took out a nunchaku to beat H1 so H1's right hand held the knife and stabbed him from the top-down, hitting Mr. M's left shoulder with one shot, and then H1 ran away. Consequences: Mr. M died before being treated.

+ Summary of content: At Toan Club at about 11 am on April 29, 2017, theater room 2 has A, D; Room 1 had B, Van D, C, and E. E and A exchanged a few sentences at the counter, after singing A was about to go home, D and C rushed in to hit A continuously with their limbs from their yard to the fence. Due to repeated beatings, A used his left hand to pull out the knife he carried in his left jeans pocket, thrust it forward and hit B's knee. B then stepped back and picked up a stone and hit A's head. While C was still continued to beat A, at this time D went out and saw that B was stabbed and bleeding, rushed in with C to hit him repeatedly in the face, A's eyes continued to stab forward with a knife and hit his stomach and thighs. Seeing that, B rushed up to hit A with his hand, but A stabbed him in the abdomen once, B used both hands to hold A's knife handle and fell down, still holding A's knife handle stripped of the knife, A ran away, B was taken to the emergency room and died at the hospital.