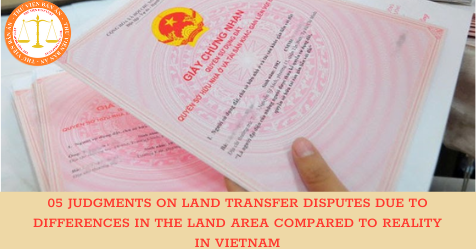 When making a transaction to transfer land use rights, the buyer often believes in the area on the red book that the seller shows. However, after a period of use and procedures for granting and renewing a new book, the actual measured area is different from the agreed-upon transfer. One of the reasons for this situation is because of old measuring equipment, so the accuracy is not high, or due to encroachment and occupation during land use. Therefore, when buying and selling land, we should invite the cadastral to measure the actual area accurately.

Effects when the actual area and the area on the red book are different:

- Pay more land tax during land use when land use tax is calculated according to the red book.

- Disputes when transferring land-use rights in case the actual land area is smaller than on the red book.

Below, is a summary of the disputes over the land use right transfer contract due to not measuring the actual area before the transaction, please refer to:

- Quoting the content: “During the transfer agreement, Mr. D and Mrs. B did not have the certificate of land use right; The two parties did not make a contract on the transfer of land use rights according to the form and were not notarized or authenticated by a competent authority in accordance with the law, violating Articles 30 and 31 of the 1993 Land Law of Vietnam. However, after when receiving the transfer, Mrs. T and Mr. X pumped sand, improved the land, and planted perennial trees; Mr. D, and Mrs. B have no objection and have not been handled by the competent state agency, so the contract of land use right transfer between Ms. T, Mr. X, and Mr. D, Ms. B is not invalidated. However, the land area in the 02 handover papers is 1,256 m2, but according to the actual measurement results, the land Mr. D assigned to Ms. T and Mr. X has an area of ​​1,078.7 m2 (including 6.9 m2 of Mr. Phan). built a house), there is a shortage of 177.3 m2.

- Quoting the content: "According to the measurement and valuation results dated February 20, 2020, the actual measured land area is 1,693.9m2, this land area is reduced compared to the land area of ​​the parties signing the transfer contract. However, Mr. T's side still agreed to receive the above measurement results, only asking to continue the transfer contract so that he could change his name according to regulations. The defendant requested to cancel the contract but failed to prove the fault of the plaintiff. The transferred land area is 1805.5m2, the parties transferred at the notary office certified by a notary, the defendant signed each page of the contract, but now the defendant believes that there is fraud about the land area. Because the defendant could not prove that he was deceived or coerced, the defendant's request to cancel the contract was denied. The first-instance judgment of the parties to continue to perform the contract is grounded.”

- Quoting the content: “At the time of transfer, the parties admitted that they had considered the status quo, indicated the boundary of the land plot clearly, did not dispute with anyone, and certified by the Cadastral officer of Q commune; The land area stated in the transfer contract is recorded according to the Land Use Right Certificate No. BL 010133 was issued to Mr. V and Ms. S with an area of ​​15,997m2, but no actual measurement has been taken. After the transfer, the parties have completed the transfer procedures, the land has been transferred to the name and granted the land use right certificate to Mr. challenge. When the People's Committee of District D measured and resolved the new plot, Mr. D's family discovered that the above land plot was only 11,812.2m2, less than the area recorded in Mr. V's land use right certificate. Ms. S is 15,997m2-11,812.2m2=4,185m2, so Mr. D and Ms. Nh sue to ask Mr. V and Ms. S to refund the amount corresponding to the missing land area according to the contract value of VND 91,563,615 .”

4. Judgment 190/DS-PT dated November 3, 2020 on the dispute over the land use right transfer contract

- Quoting the content: "At the time of handing over the land, due to mutual trust, the two parties did not carry out specific marking and measurement to determine the correct land area and the lengths of the sides indicated by the transferor land to the end of the rubber tree area, excluding the coffee area. Process of using up to now the land boundary between the households adjacent to my family has not changed, there is no change and there is no dispute with anyone. On November 30, 2018 we carried out the procedure to liquidate rubber trees with Rubber Company to convert to coffee. In April 2019, we cut the rubber tree, re-measured the land to grow coffee, and found that the land area was not enough 13,786 m2 but lacked land about 1.5 to 1.7 ha

- Quoting the content: "On June 9, 2015, Mr. H had an agreement with Mr. Q to transfer the land plot number 3157, an area of ​​700 m2 (according to actual measurement, the area is 671.3 m2). Mr. H has handed over the full amount of money to Mr. Q and the two parties have signed a contract to transfer land use rights at the Tay Bac Notary Office. Mr. H then carried out the procedures for granting a land use right certificate, but the data and area did not match the land use right certificate of Mr. Q, so the branch of the land registration office of Cai B district measured and checked. On the other hand, after measuring and checking, the actual area matches Mr. Q's certificate of land use rights, but the number of plots does not match. The competent authority requested that the contract appendix be notarized, but Mr. Q did not agree but did not return the money or carry out the procedures for transferring the name to Mr. H."