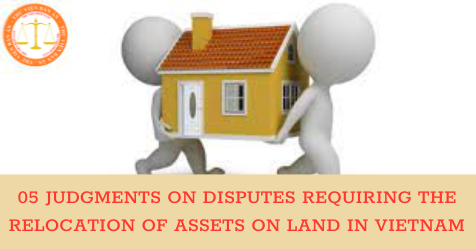 Disputes requiring forced relocation of assets on land often arise after disputes over land use rights. Then, after the results of the dispute, it is determined whose land is legally owned by the lawful land user, the lawful land user has the right to request the remaining parties who have assets on their land to carry out procedures to relocate the property and return it to its original state.

Below, is a summary of judgments on disputes requiring the relocation of assets on land in Vietnam, please refer to:

- Excerpt from the content: "In 2002, Co., Ltd, now Company C, built a water pipeline system according to the Truong Phap route project through the land of Mr. and Mrs. Hoang Quoc B and Mrs. Pham ThiThu H. The part of the water pipe passing through this part of his family's land has a length of 20.4m and a width of 1.2m. According to the commitment, this land loan of the Company is for 03 years. However, from 2002 to now, it has been nearly 10 years since this pipeline was built. This pipeline system brought many inconveniences to his family in the process of using the land or repairing or carrying out other activities on this land. He repeatedly submitted a request to Company C to relocate this pipeline, but did not receive a satisfactory solution.”

- Excerpt from the content: “His family has only this single path that has been used continuously and stably since before 1980 (since his parents were still alive), so he repeatedly asked Mr. M to return the status quo without encroachment and narrowed the path, using only his own land, but Mr. Hoang Van M did not cooperate. Mr. Hoang Van M continued to weld an iron gate with a lock right at the beginning of the path where it is adjacent to the concrete road of the hamlet to show his sovereignty and control the movement of his family, greatly affecting the transportation and transportation of his family's belongings."

3. Judgment on the dispute over land use rights and forced relocation of property on land No. 51/2021/DS-PT

- Excerpt from the content: "The encroachment incident took place from 2013 to present, 06 households have competed for the land of the Company, deliberately planted Na tree, affecting the exploitation, management, and operation of the Company. The company has repeatedly requested the local government to settle; The People's Committee of Commune Y has also met many times with households to negotiate and resolve the feelings between households and the project implementation company in the form of partial support for planting Na tree, but the households claim it. Asking for support is too high, so it can't be solved. The households could not provide any documents and papers related to the amount of land occupied. To ensure the legitimate rights and interests of the Company in the implementation of the project, Co., Ltd. A filed a lawsuit to request the People's Court of Huu Lung district, Lang Son province to settle.

4. Judgment on the dispute over land use rights and request to relocate assets on land No. 31/2021/DSPT

- Excerpt from the content: "After the death of his parents, Mr. C was the person who directly managed and used the land and declared the period in 1983. In 1986, Ms. Thach Thi B and her husband, Mr. Thach X, came to apply for a shared house with Mr. C in a 3-room house on the land left by his parents. In 1989 due to difficult family circumstances, Mr. C and his wife went to work far away. In 1991, Mrs. Thach Thi B and her husband declared this land. In 2001, Mr. Thach S registered to declare. In 2000, Ms. Thach Thi B transferred an area of ​​298m2 to Ms. Son Thi D, an area of ​​425.5m2 to Ms. Thach Thi S, and an area of ​​658.5m2 to Ms. Thach Thi L, belonging to plot No. 40, map sheet No. 4, located in cluster 2, town T, district T, this incident no one in the family knows. Currently, Ms. Thach Thi L has been granted a certificate of land use right and transferred this land to Mr. and Mrs. Tram Minh S and Ms. Tran Thi Tr, but has not yet completed the procedures to transfer the name. Now Mr. Thach C is suing Ms. Thach Thi L, asking to return the disputed land with an area of ​​658.5m2 (actually measured 682.1m2) in plot 40, map sheet No. 4, located in cluster 2, T town, district T, Tra Vinh province for him and forced Mr. Tram Minh S and his wife to move their house and other assets on the land to return the land for him to manage and use.”

5. Judgment on the dispute over land use rights and request to relocate assets on land No. 13/2021/DS-PT

- Excerpt from the content: "In 2000, on the basis of reviewing the actual status of land in actual use, the competent state agency simultaneously granted land to the people of TK commune, including his family, 25,100 m2 were granted for forest garden land in team 2 village K, TK commune, belonging to plot No. 24, map sheet No. 13, map of TK commune, has been issued by the People's Committee of District BQ with the Land Use Right Certificate (GNQSD) No. S044494 entered in the grant book. GNQSDĐ No. 00452/QSDD/517/QD-UB, dated December 15, 2000 in the name of Mr. Trieu Van N. During the use process, his family cleared, repaired and cared for the forest garden. On the land area his family was granted LURC, there is also the grave of his great grandfather, Hoang Thi L. By 2016, Mr. Nguyen Van T arbitrarily exploits juniper, fat, and natural trees, and grows oranges on his land, then a dispute arose. He asked the Commune People's Committee to reconcile but failed, so he sued to force Mr. T to relocate all the crops grown on the land to return the encroached land to you."