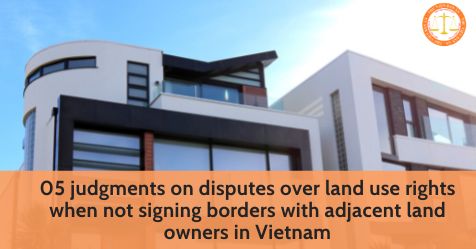 When performing a land use right transfer transaction, the two parties usually base themselves on the area on the red book. In case, after a period of using the land, you build a house on the land and suddenly one day your neighbor asks you to change the structure of the house because it has encroached on their land. One of the reasons for this situation is that when you bought the land, you did not make a written record of bordering the land with the adjacent landowners.

Article 11a. Refusal of application for registration and issuance of certificates of land use rights and ownership of houses and other land-attached assets

1. The refusal of the application file for registration and grant of a certificate of land use rights and ownership of houses and other land-attached assets shall be made when having one of the following grounds:

a) Not falling under the authority to receive dossiers;

b) The dossier does not have enough components to carry out the prescribed procedures;

c) The declared contents of the dossier do not ensure the completeness, consistency and validity as prescribed by law;

e) Failing to meet the conditions to exercise rights as prescribed by the law on land and other relevant laws.

Following that, there is no provision in the law to refuse to receive a red book application for the reason that the neighbor does not sign the border. However, it is a common and easy way to determine if there is a land-use right dispute with adjacent landowners. Therefore, when buying land, it is best for everyone to make a record for the adjacent landowner to sign and stake the boundary marker in order to avoid any unnecessary legal disputes later.

Below are some judgments with content on disputes over land use rights and land boundaries when the land use right holder does not make a written record of bordering or contiguous with the adjacent landowner, please refer to:

Quoting the content: Mr. Trinh Cong M appealed against the first-instance judgment and said that his family did not borrow or encroach on the land of Mrs. C's family because that land area was abandoned with dense vegetation but it was located close to his house, so he has cleared to plant bananas since 1975. In 2013, Mrs. C came to her house to ask her family to sign the border to carry out procedures for granting a certificate of land use rights, but her family disagrees because the land area in his family has been used to grow crops stably and continuously since 1975 without any dispute with anyone. Although his family did not sign the border, on June 18, 2014, the People's Committee of Q city still issued a land use right certificate to Mrs. C for the above land area, which is illegal. Although his family has no documents for the disputed land area, they have used it stably, honestly, continuously for more than 40 years without any dispute with anyone, so they have the right to use this land area.

3. Judgment 55/2020/DS-PT dated May 22, 2020 on disputes over land use rights, passage through adjoining real estate, claim for compensation for damage

Quoted content: "In 1994, Mrs. Nguyen Thi O (the aunt of Mrs. Nguyen Thi G) divided the land among the households in her family, including Mr. U, Mrs. Y, Mrs. X, and Mrs. G, a piece of land each. Ms. G's land is said to have an area of ​​​​100m2, belonging to plot No. 1635, map sheet No. 02, located in Ward 3, City V, which has been granted a Land Use Right Certificate No. R by the People's Committee of Ba Ria - Vung Tau province dated September 20, 2000 for Ms. Nguyen Thi G, enclosed with a location map made by the Economic Division of the People's Committee of City V on September 10, 1994. The land boundary between households divided in the family line shown on the diagram is related, not in the field. In fact, households who are allocated land want to determine the location of their land-based on the boundary line between Ms. O's land and the Group's land. Ms. G's land is determined starting from the boundary between Ms. O's land and the Group's land at 32.5m, ending at 42.2m. Mr. Nguyen Ngoc C, when he bought the land from Mrs. Nguyen Thi V (who is Mrs. U's child), only had a certificate of land use right, without a map of the attached land location. Later, Mr. C redrawn the map of the land location but did not get the signatures of the border between the adjacent households, so the result was a deviation in the location of the land used in the field.

Quoted content: "At the time of issuance of the Land Use Right Certificate, the actual measurement of the land plots was not carried out, but based on the extract of the cadastral map, the boundary between the land users was not signed. Moreover, these two land plots are adjacent to the canal, so there is a difference between the area stated in the land use right certificate and the actual measured area. Therefore, it is not possible to base on the actual measured area which is sufficient and insufficient compared to the area stated in the Land Use Right Certificate to determine whether the use encroaches on the land of another user or not. "

5. Judgment 52/2019/DS-PT dated May 15, 2019 on disputes over land use rights, relocation of assets on land, and request for cancellation of land use right certificates

Quoting the content: "In 2013, when Mr. D built a fence around her husband's house on top of the fence that Mrs. Ta Thi M built in 2002 (but still left a 0lm wide path for Mrs. Ta Thi M to walk), Mrs. M asked to return the land on the grounds that Mrs. M's family had been granted a land use right certificate. At that time, Mr. D called him up to talk to Mrs. M, the two families agreed not to dispute anymore and agreed to open an agreement for Mrs. M's family to travel. In 2015, Mrs. M deliberately sued him from the village to the People's Committee of the commune, the People's Committee of the district, and now she sued Mr. D in Court, so Mr. D built the road to block the passage. The rest of his family's land is still farmland, only converted from the old book to the new one. When converting the book, he was not allowed to declare, but it was done by commune officials, so he didn't know that there was no land area that Mrs. M was in dispute. When Mrs. M went to make a land-use right certificate without informing her family, her family was also not allowed to sign the borders of adjacent households."