05 judgment on abduction of a person under 16 in Vietnam 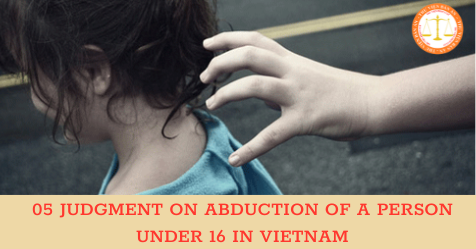 Abduction of a person under 16 as prescribed in Article 153 of the Criminal Code of Vietnam is an act of using force, threatening to use force or other tricks to seize or hand over a person under 16 years of age to another person.

Here are five sentences for the abduction of a person under 16 in Vietnam, please read for reference.

+ Quote from the content: "Because he still has feelings for Mr. H1 and wants to mend their love relationship, T had an intention of using his nephew H to force Mr. H1 to return to live with him. Around 3.30 pm on December 20, 2016, T hired Mr. Bui Van N, born in 1969; residing at Hamlet 8, commune I, district C, Hai Phong city, driving motorbike taxis to H's school, then entered her classroom to meet Ms. Nguyen Thi V, born in 1985, who is a homeroom teacher, and asked for permission for pick up baby H soon. Because she didn't know that T and Mr. H1 had broken up, Ms. V agreed to hand over H's nephew to T. After picking up H, T continued to hire Mr. N's motorbike taxi to take them both to the gas station area in Thien Huong commune, district C, Hai Phong city, then took a bus and took her daughter H to Pham Thi N1's house, born in 1963, in village 3, K commune, L district, Hai Phong city. At Mrs. N1's house, T introduced her adopted son H to members of Mrs. N1's family and asked to stay for a few days. During the time at Mrs. N1's house, T constantly used her mobile phone, her brand Nokia 1202 texted Mr. H1 with the content expressing his frustration at being cheated by Mr. H1. T also lied to Mr. H1 about being pregnant with Mr. H1's child and threatened to die together with H.

+ Quote from the content: "Ngo Van B walked past room number 7 and saw that the door of the room was ajar, Mrs. H was lulling baby T to sleep in a hammock in the inn's room, B remembered her son, so she had an intention to rob T  about nurturing. At this time, B pushed the door, and entered the room to take baby T out, but was prevented by Mrs. H, struggling with B to win back baby T; B used her hand to push Mrs. H and went out of the motel room when Mrs. H shouted: "kidnap". Hearing the cheers, Mr. Ho Van M (in the same row of motels) came out and saw B holding baby T, arrested B, took back baby T, handed over Mrs. H, and at the same time called the TK Commune Police to come to the scene. receive and make a record of arresting offenders in the act."

+ Quote from the content: "H actively became acquainted with Tran Tuan V2 through the social network FACEBOOK, then they regularly communicated back and forth and developed a relationship. During the conversations, V2 happened to know and love grandchild N. H pretended to tell the plight of poor N, but Vinh said he wanted to adopt N to take care of him. Since then, H has the intention of appropriating N and giving it to V2 for adoption, so that when in trouble, H will be easily helped by V2 with money.

Around 7:00 a.m. on November 1, 2019, H pretended to ask Mrs. T's permission to take her grandson N out and Mrs. T agreed. Then H drove a motorcycle BKS 67L7-6285 to take N's grandson to An Giang Provincial General Hospital to send his motorbike, then took a taxi to the Martyrs Cemetery area in District C, An Giang province, and handed him over to V2 to take it home in Ben Tre province.”

+ Quote from the content: "Nguyen Thi Ai N took Luong Phuoc Dang (N's biological son) to primary school "C" Khanh Hoa in Khanh Hoa commune, Chau Phu district, to complete enrollment procedures for Dang. There, N and Dang went to the school canteen to eat; At the same time, Nguyen Thi Ngoc Y, born in 2015, came to beg for food, so N gave Yen food. Seeing Y wandering alone, N asked Phan Thi T (the shopkeeper in the canteen) "Whose child is Baby Y, why is he wandering alone"; T replied, “Y is the son of Nguyen Huu D who lives behind the school, his parents are divorced, his father is often drunk, so he left him to wander, not taking care of him and not allowing him to go to school”; N told T to ask Y to adopt him, T said, "Many people applied for Y, but D didn't let him". At this time, N asked Y "Will you be her adopted child"; Y replied "Yes", then N took him home to Khanh Chau hamlet, Khanh Hoa commune, Chau Phu district.

+ Quoting the content: "On March 21, 2021, P went from Xuyen M district to P city to spend a month with T, then stayed in N's motel room to play. At about 12:30 on March 22, 2021, taking advantage of Ms. N's sleep, P surreptitiously carried her grandson T to the front of the motel room to catch a taxi (unknown driver and license plate) to the city B, Dak Lak province, and then continue to pick up the bus with plate number 81B-057.91 by Mr. Tu Quoc Q control, to bring T to Ho Chi Minh City.”

Phuong Uyen
27
Key word: abduction of a person under 16 in Vietnam | Article 153 of the Criminal Code of Vietnam |